some real excitement as he has decided to overfeed his fans with loads of music.

After waiting for almost eight months to put out an official single in 2019, Wizkid in the space of a month has dropped two music already. More than three weeks ago, the superstar dropped “Ghetto Love” and just recently as yesterday, he dropped another banging tune; “Joro” which his fans have been going crazy over.

However, Wizkid has announced on Twitter that he isn’t stopping at “Joro” at all as he would be dropping another record in a week. He revealed this after a follower thanked him for dropping “Joro” and he appreciated the gesture, revealing another song is dropping soon. He wrote; “Love you guys more! Sorry for da wait. Another jam next week!” 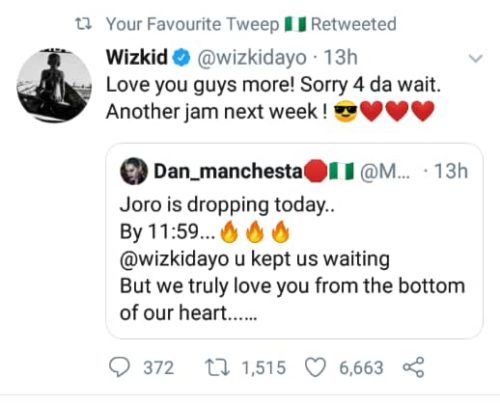 Like Loading...
READ  Wizkid Reveals Why He Can’t Make A Song About Critical Issues In The Country
Page 1 of 1 Prev Next