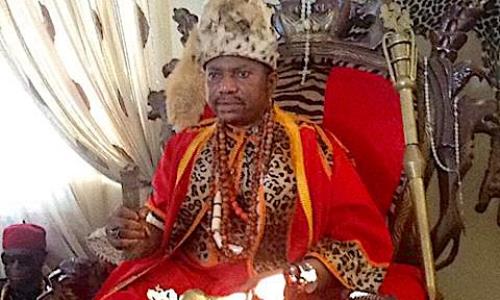 Igwe MacAnthony Okonkwo
The traditional ruler of Alor Community in Idemili South Local Government Area of Anambra State, Igwe MacAnthony Okonkwo has apologised to the state Governor, Willie Obiano.
His apology comes after he violated certain rules guiding the operation of monarchs in the state.
Recall that Igwe Okonkwo is one of the 12 traditional rulers recently suspended by Governor Obiano for travelling to Abuja to report him to President Muhammad Buhari.
At a press conference on Saturday, Igwe Okonkwo tendered an unreserved apology to Governor Obiano and the state’s Traditional Rulers’ Council.
He acknowledged that the trip to Abuja without the governor being informed violated certain rules guiding the operation of monarchs in the state.
“It was a serious slip on my part not to have informed the government about the trip to Abuja before embarking on it. I therefore tender an unreserved apology,” Igwe Okonkwo said.
Okonkwo, who is the only monarch among those suspended to beg for forgiveness, denied receiving financial inducement and gifts to participate in the Abuja trip.
He explained that the money he was seen counting in a viral video was meant for his driver and other aides for their upkeep. He said:
“How can they call it a bribe? What kind of bribe is that? That is total fallacy? I was counting out money for my driver and other aides for fuel and their welfare.
“I have never taken any bribe in my life from anybody. But if I wish to do so, you have to pack Ghana-Must-Go bags of dollars up to 10 or 20, if I receive them, then you will be talking about bribes..
”Secondly, Ndi Igwe do not have constitutional right to remove the governor or do anything to him. We are not lawmakers who have such constitutional rights”, he stated.
It had been reported how the 12 Traditional rulers travelled with oil magnate, Prince Arthur Eze, to report Governor Obiano to President Buhari, over his non-conduct of local government elections in the state and other issues.
Prev postNext post
Use your ← → (arrow) keys to browse
READ  Video Of NYSC LGI Threatening Corps Members With Cane In Rivers State
Page 1 of 1 Prev Next