Nigerian musician Runtown will release a new song on Friday.

Runtown made this announcement on Tuesday, the 22nd of September via his social pages where he stated that the single, which is titled “Kini issue” will be released on Friday, the 25th of September 2020.

The artist has been quiet on the music front since May 2019, when the Tradition EP and a couple of music videos were shot.

He however has been spending some time with his new bae, Sudanese born Model, Adut Akech who he gave a promise ring to. 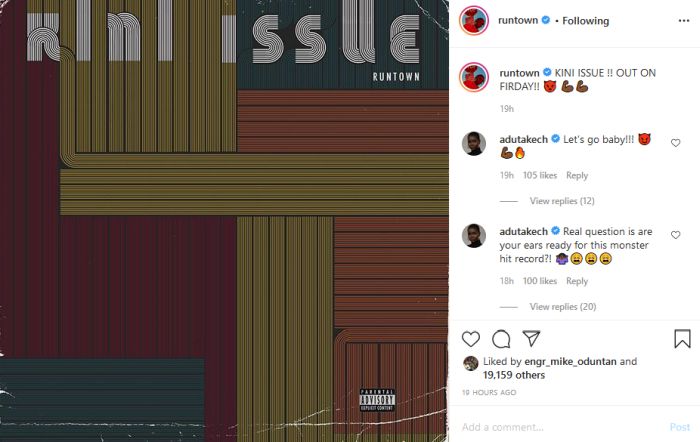 In 2014 he released “Gallardo”, a song which features vocals from Davido and was released as the first single off his debut studio album Ghetto University. Gallardo went on to win “Best Collaboration of the Year” at the 2014 edition of the Nigeria Entertainment Awards. On 23 November 2015, Runtown released his debut studio album titled Ghetto University via MTN Music Plus through Eric Many Entertainment. The album generated over ₦35million on the music portal thus earning him a spot in the list of “Top 5 Most Streamed Artist”.

On 4 November 2016, Runtown released the ballad “Mad Over You”, which charted at number 38 on the Billboard Twitter Top Tracks chart. Joey Akan from Pulse Nigeria described the song as a “self-produced track that draws inspiration from the Ghanaian Alkayida sound”. Runtown told The Fader magazine that the song was inspired by African beauty.

Let see what he has in stock for us this time.