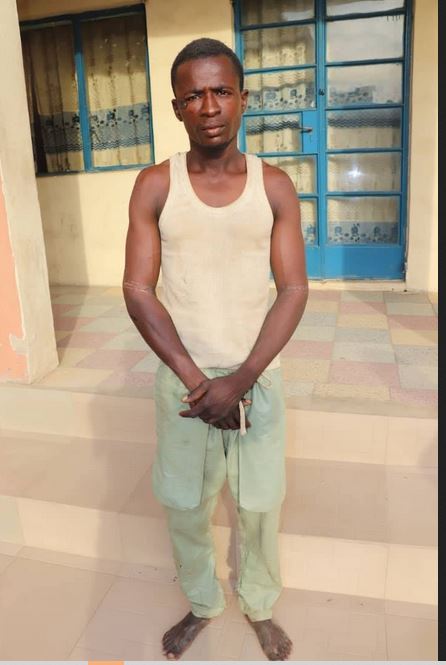 A suspected armed robber identified as Mohammed Sani has been arrested by the Niger State Police Command for killing a motorcyclist in Zengeru town.

Spokesperson of the command, ASP Wasiu Abiodun, who confirmed the arrest in a statement on Wednesday, said the suspect and his gang members lured the deceased to a forest where they hacked him to death with a machete and made away with his motorcycle

“On 07/12/2020 at about 1700hrs, based on a tip-off. Police Operatives attached to Zungeru Division arrested one Mohammed Sani 25yrs ‘m’ of Sahon-Rami Mashegu LGA who boarded an unregistered Bajaj motorcycle with three others,” the statement says.

“On reaching a point along the forest around Government Day Secondary School, Zungeru, the suspects pulled out a rope, tied the rider and matcheted him while Mohammed was given the motorcycle to ride to Kebbi State,”

“He was later arrested by Joint Police/Viglantee on patrol along Zungeru-Wushishi road and led the Police to the scene where the victim was laying dead with deep cut on the neck. The corpse was taken to General Hospital Wushishi for autopsy,”

During interrogation, the suspect confessed to the crime and mentioned three others; Ishau, Yahuza and Sani who are currently at large. The case is under investigation and effort is on going to arrest the fleeing suspects

Like Loading...
READ  Revealed: Over 100 Chevron Employees Suspected Of Having Coronavirus Secretly Quarantined In Delta Hotel
Page 1 of 1 Prev Next