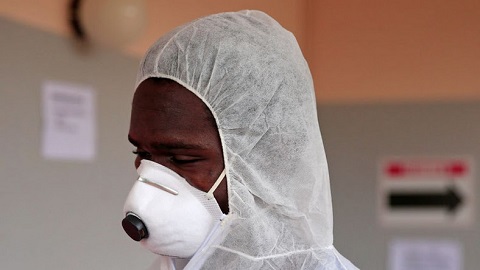 Coronavirus (File photo)
A 57-year-old police officer has died after contracting the deadly coronavirus in Edo state.
It was gathered that the diseased said to be a Chief Superintendent of Police (CSP), is the second victim to have died of the virus in the state.
Confirming the story on Wednesday in Benin, the State Commissioner for Health, Dr. Patrick Okundia said the victim died on Tuesday.
He, however, did not disclosed if the deceased was among cases profiled by the state and the Nigerian Centre for Disease Control (NCDC) and how he got infected by the virus.
Okundia added that the police officer was first treated at police hospital when he took ill, but later died at his house before the arrival of his sample test.
He said: “We had an unfortunate situation of a 57-year-old police officer who passed on (Tuesday). The story is not very clear how he got the infection, but he developed some illnesses.
“Initially, there was no evidence of suspicion for coronavirus disease, but when the symptoms started getting worse he was treated at the police clinic.
“And about two days before that death, our surveillance team were called to have a look at him and it was in that process they took the sample and sent it to the laboratory while he continued with his drugs.

“He was placed on self isolation. However, the result came out and it was positive.
“At the time we could get to his house to move him out, the man had died that same day.
“It is really unfortunate and the result came after the man had died.”
Prev postNext post
Use your ← → (arrow) keys to browse
READ  1861 New COVID-19 Cases, 1089 Discharged And 22 Deaths On January 27
Page 1 of 1 Prev Next