Last time, Davido unveiled Ifeanyi’s face since he was born in October 20, 2019.

After the news of his birth, Davido and his wife, Chioma held their son’s naming ceremony in the United Kingdom on Saturday, November 9, 2019.

Since then the pop star has been sharing snaps of the young lad, though without revealing his face.

Well, he has finally let us get the change to see the cuties face, and he is truly adorable.

David Adedeji Adeleke Jr, who was born in London, holds trio citizenship in Nigeria, United Kingdom and the US.

Davido had taken to his Instagram page to share a rare adorable photo of himself and Ifeanyi. In the picture which he captioned “Junior,” Davido had Ifeanyi in his arms and fans trooped to the comment section to gush over the father of three for spending quality time with his son.

However, a fan took things to another level by calling Ifeanyi a frog. “Junior Frog Voice.” The “FEM‘” singer who since his return to social media has been tackling negative comments about him responded cursing the entire generation of the troll. “ur own pikin go be furure broke boi“ 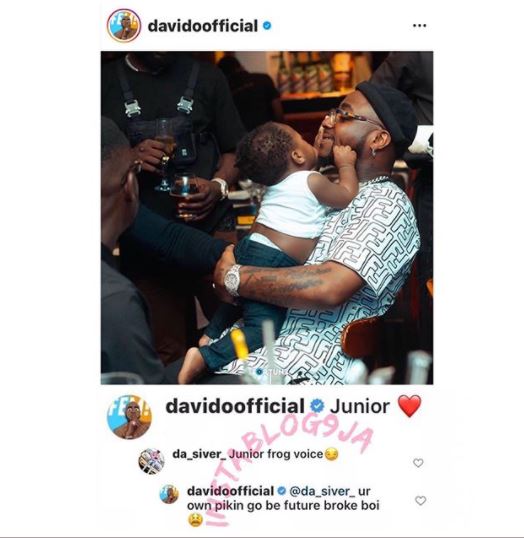