DMW Boss, Davido after a 3-month break, returns back with a brand new single titled ‘FEM!’

The track “FEM” is believed to have been extracted from his forthcoming third studio album “A Better Time”. And it is obvious that the song is a diss track in response to 2 of Burnaboy’s tracks on “Twice As Tall“ Album “Way Too Big“.

The title of the song is supposed to be “PARA” by right. In fact, it was originally “PARA” before he suddenly changed it to “FEM“ after listening to Burnaboy’s “Way Too Big”. Hmm Wahala dey o.

We all know what FEM means in Yoruba language. In case you don’t know, FEM simply means ‘Shut Up’.

And who is Davido telling to shut up? His fans, Buhari or his Baby mama Chioma? He is obviously referring to his enemies of course and Burnaboy is his principal’s enemy in Nigeria not even Wizkid.

Believe it or not, ‘FEM’ is a direct diss, attack, and a threat to Oluwa Burna. A big slap to Burna’s face.

On the verse 1 of the song, Davido was like;

“E be like you don dey talk too much

On same verse 1: The second lines he said;

“Person wey dey find the pitty, Omo no dey give me itty bitty

But OBO why na. Is it because Cynthia Morgan is Burnaboy‘s Bestie. Hmm this Fight go tough oo. I hope Davido can withstand it las las.

The above line is for Burnaboy directly. In fact the ‘Odogwu‘ simply means ‘Burnaboy‘ no cap.

Then the second verse of the song, Davido was talking about something deep that most of his fans don’t know about. Only a few will understand. 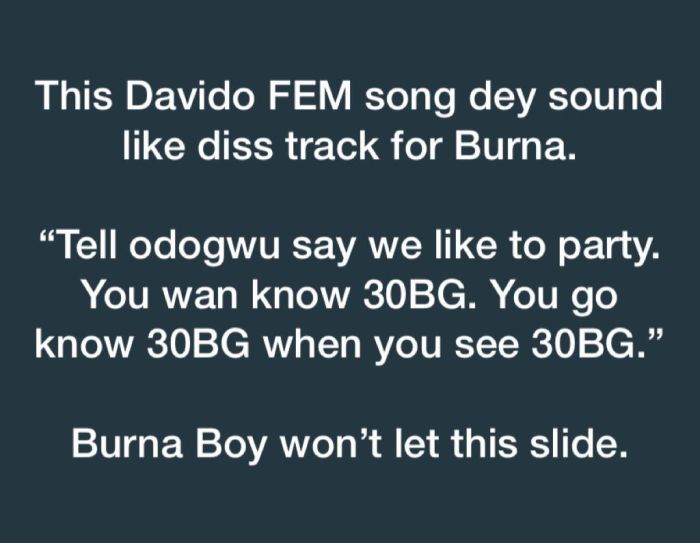 Before the whole matter gets dangerous,

You need to make sure you don’t stay too much,

“I get men, I no dey gather boys, I dey live my life, man dey turn am to shoot on sight

Funny enough, Davido and Burnaboy MIGHT be fighting for something outside music that most of their fans don’t know about. Maybe for supremacy.

Nobody is yet to figure out the origin and the cause of their fights tho. That is why I said ‘Davido and Burnaboy might be fighting for something outside music that most of their fans don’t know about’.

You get the point now abi?

Maybe they’re dragging woman or something. They should continue.

The only real fight is between Wizkid and Davido. And you all saw how bloody it was before they finally settled. Upon settlement, they’re still having little misunderstanding.

Anyways, whether real or fake, they should continue the beef and diss biko. Besides, that’s the fun in music. Oluwa Burna do something about this, don’t let this slide.

Well, now that Davido has given it to Oluwa Burna hot hot with no mercy, do you think Burnaboy will clap back or let go?

I mean Davido literally finished Burna on this “FEM” track.

Do You Think Odogwu Burna Will Let This Slide?

Do You Agree That Davido’s New Song “FEM” Is A Direct Diss At Burna Boy?