Media Personality Daddy Freeze has given a succint view of what being a divorcee means and the challenges they face in the society.

Ifedayo Olarinde was born in Cluj-Napoca, Romania to a Nigerian father and a Romanian mother. He spent most of his growing years in Ibadan, Oyo State, where he attended the International School. He has a degree in sociology from the University of Ibadan.

Freeze started his radio career in 1996 with the Broadcasting Corporation of Oyo State (BCOS), Ibadan and joined Cool FM in 2001 working in radio presenting, television and general entertainment. He is a senior broadcaster at Cool FM Lagos.

He is also an event compere. He has hosted a number of music concerts, comedy shows and Nollywood premieres in Nigeria, Ghana and the United Kingdom.

The media personality who said this in reaction to the report of a 23-year-old lady who recounted how she was ridiculed for being a divorcee before being called to bar, stated that divorce is not the end of life but an opportunity for a new beginning.

Daddy Freeze noted that he feels the lady’s pain but is also proud of her for not staying in a putrid situation like many of those subsumed by social pressure.

Read what he wrote below:- 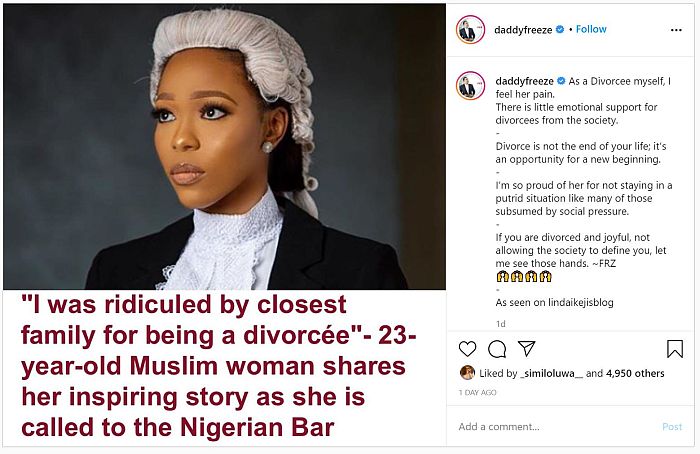