Former Big Brother Naija season 4 housemate, Frodd has disclosed that it’s disrespectful for a man to leave money on the table of a lady at the bar.

According to him, this isn’t oppression or anything of that sort but it’s just disrespectful for a guy to leave money on the table of a lady at the bar.

Adding that if you want to pay for her drink you do so or if you want to give her money you sign a blank check for her if you can afford but not to leave a bundle of cash which its source isn’t known on her table.

He said this while reacting to a post of a lady claiming a guy came to her table and dropped a bundle of cash and left without saying a word to her. 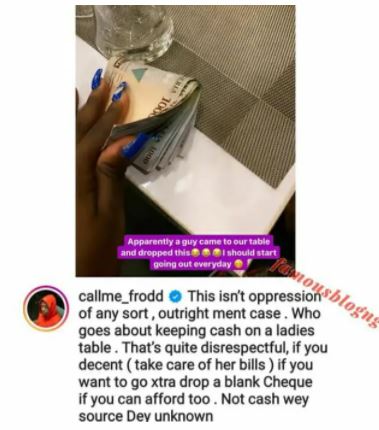 Like Loading...
READ  “Policeman Who Shot Wizkid’s Fan Dead Has Been Arrested” – Ruggedman Gives Update
Page 1 of 1 Prev Next