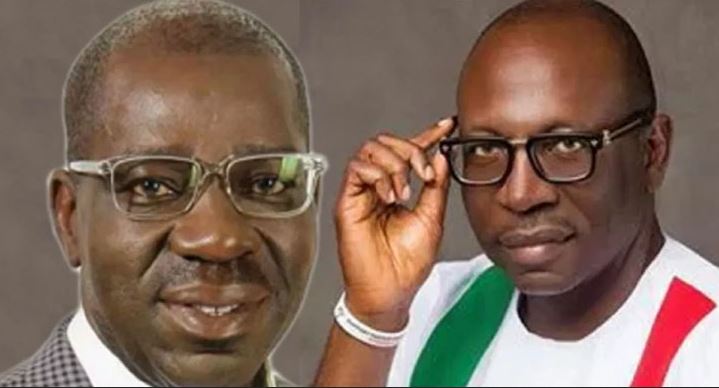 According to a report by The PUNCH, there was a mild drama on Friday evening during a debate organised by BBC News Pidgin for candidates in the September 19 Edo State Governorship Election as Governor Godwin Obaseki excused himself from the debate just at the beginning.

Obaseki, who is seeking re-election on the platform of the Peoples Democratic Party, had featured briefly in the virtual debate but stepped out to attend another meeting.

The governor asked the moderator and his co-panelists to allow his deputy, Philip Shaibu, to continue the debate in his stead.

This development drew the ire of the All Progressives Congress candidate, Osagie Ize-Iyamu, who objected to the idea, insisting that he would not debate with Shaibu.

Obaseki said, “First, I wan’ thank una say una invite me come this programme, make we debate among ourselves, make we fit talk wetin we wan do for the people of Edo State.

“But make I first start by apologising. You see, as I dey now, I no dey Benin. I had to travel on emergency this evening come somewhere. And the meeting dey very important. But abi tell una, so my deputy dey on ground. E no get anything wey I dey do wey im no know.

“So, I say out of respect, make I first do this opening round, I will rush go the meeting, and hopefully my deputy go continue.”

Reacting, Ize-Iyamu said, “Abeg make I talk small for wetin Governor Obaseki talk. This debate na for governorship candidates, no be wetin den dey delegate. If he no go fit stay, he no go fit stay.

“But say he wan’ comot make im deputy go come dey follow us debate, I no get hand for that one. If he no dey ready, make im no say, he no wan’ debate with us.

“But if he wants to debate, he has to stay but me no go sit down with im deputy. If na deputy own, I go call my deputy make im come talk with im deputy. No be me and im deputy dey debate, na governorship debate.”

Obaseki later left Ize-Iyamu and Jones Osagiobare of the Young Progressives Party to continue with the debate. His deputy, Shaibu, did not, however, feature at the debate but the governor resurfaced after about an hour, towards the end of the debate.

The two major candidates in the election had on Sunday shunned a governorship debate organisation by the Esan Development and Transformation Initiative which was moderated by the Senior Pastor of Lagos-based church Trinity House, Ituah Ighodalo.

Like Loading...
READ  Revealed! How NDDC Paid Staff N655m For Training, Foreign Trips During COVID-19 Lockdown
Page 1 of 1 Prev Next