Olamide occupies a place in the history of Nigerian music perhaps a legend, but that legendary status is getting weaker.

One of the most mundane and surprising moments of 2019 was when Olamide was compared to Rema.

For Olamide stans, it was absurd comparing Olamide, a legend who reigned supreme in the 2010s with a slew of hit tracks to a newbie who just arrived. 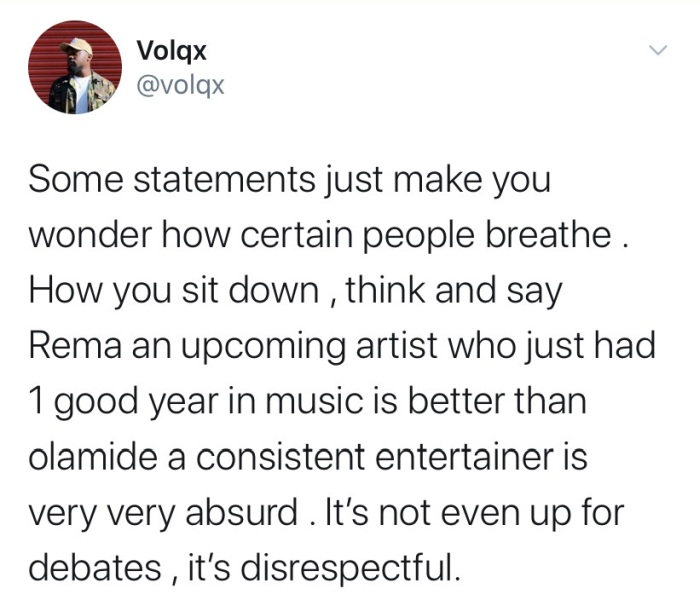 Let’s be clear though. It wouldn’t have happened if Olamide had evolved early. The music space was gradually changing as at 2016-2018 when the “Afrobeats to the world movement“ was at its peak.

Wizkid and Davido had inked deals with Sony Music and had started to penetrate the global music space with their well-tailored releases.

Olamide perhaps had refused a deal and opted to remain “local” as people put it.

That meant the game was now at another level. It meant the music game was no longer a local thing anymore, Wizkid and Davido had levelled up with co-signs from Drake, Chris Brown, Young Thug and other acts.

Thus, conversations were always about who charted on Billboard, who had more streams and who was being featured the most.

And fans for sure helped to spread these co-signs as huge wins.

On the other side, the music space was no longer welcome to the street hop hits Olamide dished out. 2019 was a quiet year in terms of hits made for Olamide despite releasing four singles (Woske, Spirit, Choko Milo, Pawon)

And when he would drop the 999 EP at the first half of this year, that low reception was noticeable again as people moved on too quickly from the project.

Thus, his forthcoming album, Carpe Diem is coming at a critical moment. At a period when Davido and Wizkid are set to reign with their projects, Olamide definitely needs this project to make a difference.

READ  CAN HE DO THIS? Olamide Says He Doesn’t Mind Going Broke To Make Sure BBN’s Laycon & Vee Released An Album Together (See This)

If it gets slept on like his 999 EP, that disrespect of being compared to new acts might continue. What Olamide needs this project to do is to issue those trademark hits he had then.

And now signed to EMPIRE, there will surely be expectations for him to deliver with Carpe Diem, commercial wise.

It’s up to Olamide to do the needful.

Will Carpe Diem Turn Out To Be A Good Album?

Let’s have your say on this.