Veteran Nollywood actor, Richard Mofe-Damijo who is known as RMD for short has also reacted to the police brutality in Nigeria.

He reacted to this in a recent social media post on his Instagram handle and he wrote;

“When you hear it’s a BAN, not an END and you have questions like….

If there are indeed measures in place, are they transparent & measurable so that the citizens can monitor, verify & report? or is this another veiled attempt at pretending that the FG cares.
I ask because I worry. I worry for young people who live in trepidation daily, not for fear of attack by hoodlums but fear of attack by the very ones mandated to serve and protect. Nobody deserves to be brutalised by SARS, Police or Army. One of my biggest concerns is that @PoliceNG will ban SARS in the media and look away as the banned operate covertly.

We don’t want a ban, we want an immediate end!!! An immediate recall, disarming and disassembling of the unit!!!! We also do not want the return of SARS in a different guise or under another name! An END should be an END!!!! Hopefully the FG will shock us this time and #EndSars for good. -RMD.#EndSARS #EndSARSBrutality #EndSarsNow #EndNOTBan” 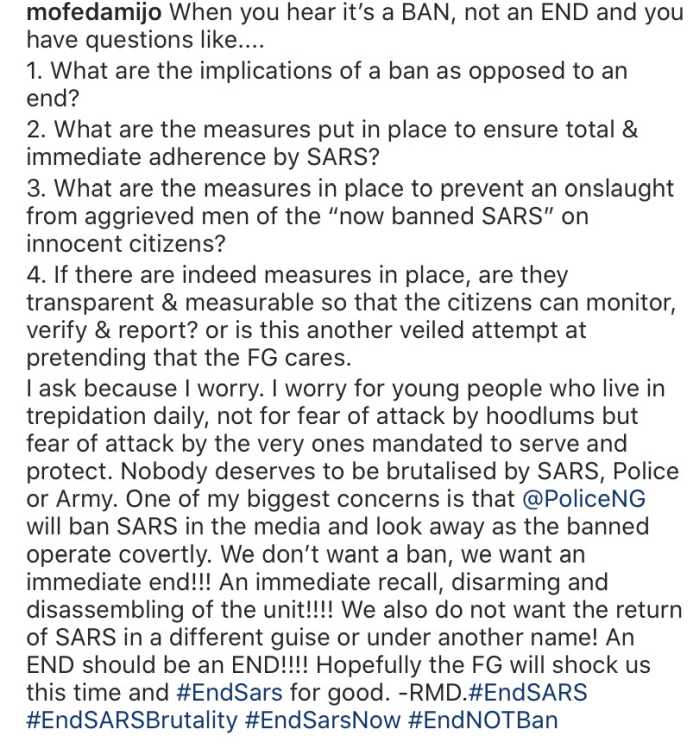