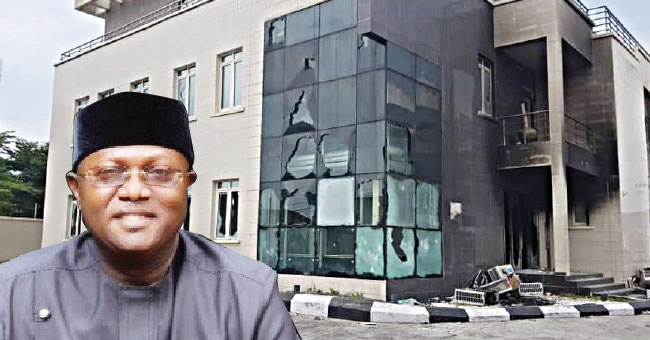 Founder of Omooba Yemisi Adedoyin Shyllon Art Foundation, Prince Yemisi Shyllon, speaks to TOBI AWORINDE on the destruction of his building in Lekki, Lagos State, by hoodlums, following the shooting of #EndSARS protesters by soldiers

How did you find out about the damage to your property in Lekki, Lagos State, last week?

Somebody passing through the area on Sunday, October 25 alerted me that my property had been burnt. I didn’t know about it. I was in Ikeja, Lagos. I learnt that the burning of properties happened between Thursday and Friday. I got to know about it on Sunday when a friend of mine, who knew I was the owner of the property, was passing by. And he was surprised and felt ‘how can Yemisi’s property be burnt when he is not in government and has no business with this government?’ He first of all called me and said, ‘Yemisi, I have some bad news for you.’ I thought somebody I knew had died. He said, ‘I want you to get ready for this bad news.’ I said, ‘What is it?’ He said, ‘Your property in Lekki has been burnt.’ I was shocked. He said he had taken photographs. I said, ‘Send me the photographs.’ So, he sent them to me.

Is the property residential?

No, it’s a three-storey office complex with two powerful generators, two 10-person lifts, and a lot of air conditioners, all provided by me for my tenants. It was under the occupancy of Aiteo Group.

Do you have an idea of the number of air conditioners and other items in the building?

I think I had about 64 air conditioners installed in the property. I don’t know what the tenants, Aiteo, added, but I installed 64 (ACs) when I rented it out to them.

Was the building also looted?

Do you know if there was any security officer stationed there at the time of the arson?

Has the cost of the damage been ascertained?

I have asked the professionals to ascertain the cost of damage; I’ve not got their report. The real professionals to do it are quantity surveyors; they are the ones that will prepare the bill of quantities.

Where in Lekki is the property?

The property is at Number 1, Admiralty Way, Lekki Phase One. It’s the first property in Lekki Phase One. I applied for that piece of land when I was doing my Master of Business Administration in the University of Ife (now Obafemi Awolowo University, Osun State). I applied for that land from the Lagos State Government as a young man. I was not yet 30.

How long ago was that?

The Special Adviser to the President on Media and Publicity, Mr Femi Adesina, said the atmosphere for looting was brought on by the #EndSARS protests rather than poverty. Do you subscribe to that school of thought?

The sociologists talk about society; they say every society should be governed by laws and should be managed in the interest of all. Socrates, in his wisdom, also said that. Aristotle, the great philosopher, said, ‘Poverty breeds revolution.’ When any society is not managed well enough, it breeds an overwhelming number of disgruntled, angry, hungry, unemployed youths who end up becoming a time bomb that can be unleashed against society. When law and order breaks down, what happens is that disgruntled elements of society take advantage of the breakdown of law and order to unleash their anger on society. And the end result is that the innocent suffer more than the guilty. I have not earned a kobo in my service to Nigeria as either chairman or member of boards. I have never awarded contracts; I have never benefited from government contracts in my life. I use my God-assisted and earned income that I have made from my versatile professional life in engineering, law, marketing, finance and so on. I have accumulated little savings in investments, both real and unreal. I’ve been made to suffer unjustly by a badly managed country.

The October 20 shooting of #EndSARS protesters at the Lekki tollgate is widely believed to have given rise to wanton looting and vandalism of private and public property in Lagos and some other states. Do you think the situation would have escalated, had the soldiers not shot at the protesters?

The Lagos State Government has indicated its intention to help business owners affected by the looting and destruction of businesses. Do you think the government should be responsible for compensation for the damage to your property?

I know that in ‘wise’ countries, when you have a property like my own, you are supposed to have some necessary insurance. I don’t know whether there are many wise people in Nigeria.