A Nigerian lady has shared photos of what she found inside the ‘meat’ pie she bought.

Political corruption is a persistent phenomenon in Nigeria. In 2012, Nigeria was estimated to have lost over $400 billion to corruption since independence. In 2018, the country ranked 144th in the 180 countries listed in Transparency International’s Corruption Index (with Somalia, at 180th, being the most corrupt, and Denmark the least).

The rise of public administration and the discovery of oil and natural gas are two major events believed to have led to the sustained increase in the incidence of corrupt practices in the country.

Efforts have been made by the government to minimize corruption through the enactment of laws and the enforcement of integrity systems but with little success.

Greed, ostentatious lifestyle, customs, and people’s attitudes are believed to have led to corruption. Another root cause is tribalism. Friends and kinsmen seeking favor from officials can impose strains on the ethical disposition of the official as these kinsmen see government officials as holding avenues for their personal survival and gain.

Taking to Facebook on Thursday September 10, Apara Joy Oge narrated how she bought meat pie, but on getting home, she discovered Macaroni inside instead of meat.

“This is the highest level of corruption ever. After a hectic day yesterday, I ordered for meat pie and a bottle of cold Malt to enable me calm down those soldiers in my stomach. Getting home, I realize I’ve been deceived. I was given MACARONI PIE instead of MEAT PIE and this has killed my appetite for pastries” she wrote. 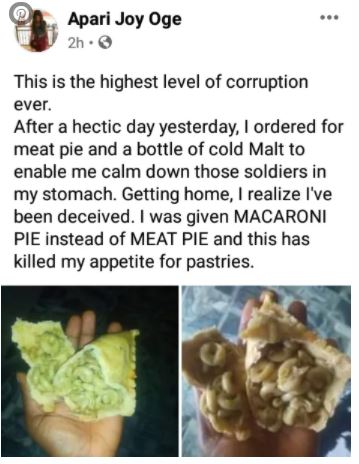