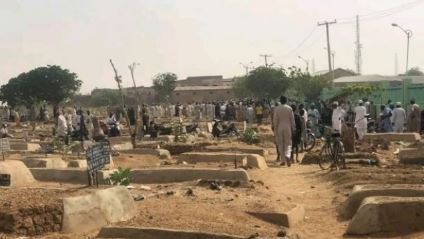 Kano deaths
The mysterious deaths of prominent Kano indigenes continued on Monday with the death of Dr Ghali Umar of the Department of Architecture of the Kano State University of Science and Technology.
He died on Monday leaving many inhabitants of the city in fear.
Vice-Chancellor of the institution, Professor Shehu Musa, in a statement, said: ”We regret to announce the death of Arch. Dr. Ghali Kabir Umar, of the Department of Architecture.”
Ghali, until his death, was a Head of Department and a Senior Lecturer in the department of Architecture, Kano University of Science and Technology, Wudil.
Musa therefore prayed for Allah to forgive the shortcomings of Umar and reward him with Jannatul Firdaus.”
Umar is the fifth prominent scholar to die in Kano in the last 72 hours.
Prev postNext post
Use your ← → (arrow) keys to browse
READ  Drug Barons And Yahoo Boys Are Investing In Nigerian Music Industry - Veteran Singer, Zaaki Azzay Blows Hot
Page 1 of 1 Prev Next