Lagos State on Thursday put Nigeria on the world record by celebrating the 60th Independence Anniversary with 60,000 cupcakes.

The state produced the largest anniversary logo in the world, made with cupcakes mosaic.

The initiative by the Lagos State Government in conjunction with Fly Africa aimed to put Nigeria in the Guinness Book of World Record as a holder of the world’s largest anniversary logo made with cupcakes mosaic in the world.

Speaking at the event held at Teslim Balogun Stadium, Surulere, Lagos, Gov. Babajide Sanwo-Olu, noted the state through the laying of the largest cupcakes mosaic, has sent a message to the world that Lagos remained a land of creativity and innovations.

Sanwo-Olu, who was represented by the wife of the State Deputy Governor, Mrs Oluremi Hamzat, at the event monitored by officials of the Guinness World Records, said that the last largest cupcakes in the world were 30,400 cupcakes made in Singapore in 2015.

“’I am sure that with this largest cupcakes mosaic today, we have sent a message to the world that Lagos State is a land of creativity and innovations. 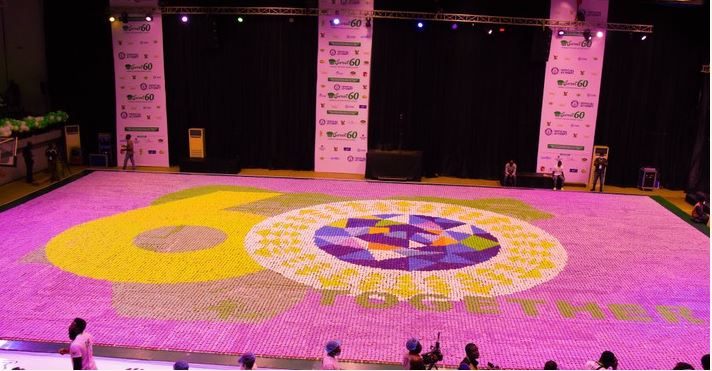 Prev postNext post
Use your ← → (arrow) keys to browse
READ  Davido’s Fiance, Chioma Returns To Twitter After A Long Break, See The First Thing She Said