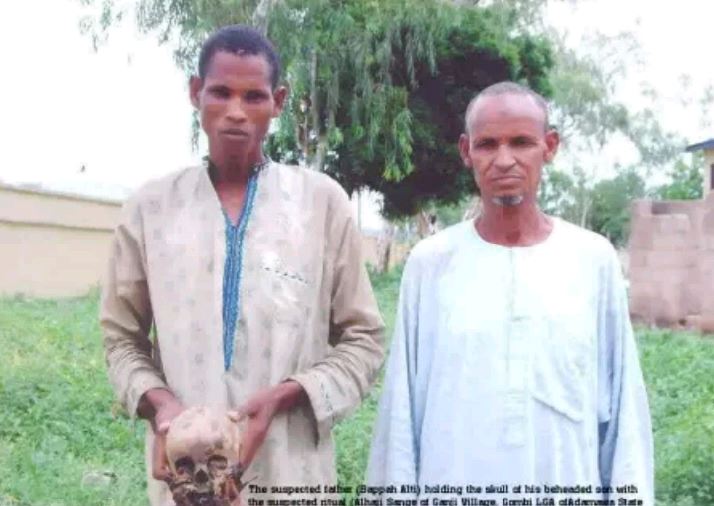 A State High Court has sentenced Bappa Alti, a 31-year-old cattle rearer to death by hanging on Wednesday, November 18, for killing his 5-year-old son for N1 million in Ganji suburb of Gombi LGA of Adamawa State.

Justice Fatima Ahmed Tafida, of the state High Court VII, convicted Bappa for causing the death of his son by hitting him with a rearing stick and thereafter chopping off his head with a cutlass.

The convict who was 24 as at the time of the incident, lured his son, Buba, to the farm on July 13, 2013 in Ganji suburb of Gombi LGA of Adamawa State and beheaded him.

When Bappa returned home alone, his father Alhaji Guza, asked about his grandson but he told him that he will come later. After waiting for days and the child not coming back, Alhaji Guza made a report to the police.

READ  Oba Elegushi Celebrates His Beautiful Wife On Her Birthday

After a search in the farm, the police discovered the decaying body of the child buried without his head.

Bappa was arrested and interrogated after which he admitted to commiting the crime. According to him, one Alhaji Sange Hassan had promised him N1m if he brought a human head.

Alhaji Hassan, however, denied the allegation, insisting that it was a set up aimed at blackmailing his person.

Bappa Alti was earlier arraigned before court for culpable homicide punishable with death contrary to section 221 of the penal code law.

He was therefore found guilty of murder which is a breach of the section 221 penal code which is punishable by death.