Mr Eazi a veteran singer has revealed that all university lecturers that give good grades in exchange for sex should not be spared.

The singer took to his Instagram story to commend BBC for exposing the evils that has been going on for decades in West African universities. According to him, lecturers who engage in such acts are predators and should be held accountable and prosecuted without fail.

He wrote Bigup everyone that put this together!! Predators must be held accountable and prosecuted. 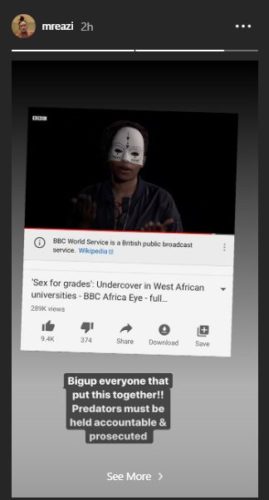 Like Loading...
READ  Davido Lands In Hot Soup In Dubai After Allegedly Committing This Crime
Page 1 of 1 Prev Next