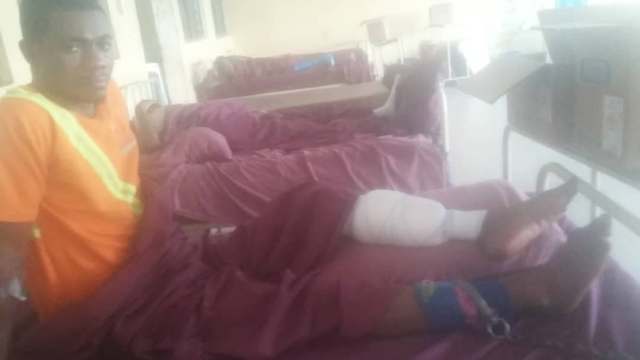 The Enugu state police command have forcefully chained a patient, with bullet wound injury to his hospital bed in the emergency unit of National Orthopedic Hospital Enugu following the August 23rd massacre of Enugu youths in Emene-Enugu, Vanguard reports.

The patient, Abraham Ani, told Vanguard that he has been on the chain since August 26 and passed both urine and excrement from the bed as he cannot move around.

The state Police Public Relations Officer, Daniel Ndukwe said he was not aware of the development, while the Medical Director of the hospital, Dr. Cajetan Nwadinigwe insisted that Vanguard must accompany him to verify if the story was true. The patient however confirmed that he was still on the chain as at the time of this report.

The patient, Abraham said: “The Police chained me to my hospital bed because on Sunday August 23, I came out from my yard going to church at St. Joseph’s, when I met one boy who told me that the Biafra people came and warned them inside the church that the church has dismissed. I immediately turned on my street and started going back.

At that time gunshots had rented the air and suddenly one soldier ran into our street and opened fire indiscriminately. I decided to hide myself and dodged beside a car so that I would not be hit by a stray bullet, this was beside my house.

“I started shouting for help when our yard members came out to notice it was me. They rushed me to a nearby hospital that was not open but our neighborhood watch personnel came and called the doctor on the phone before they opened the hospital and they started attending to me. I was still there when the police, army and others came in there, greeted me and said sorry to me, that I was not the one they were looking for and they left. Later in the evening of the same day another group of policemen came and interviewed me. I told them that I work at Emenite and showed them my Identity card and told them what happened and they left.

“The following day, I went for an x-ray that indicated I have a broken bone and the hospital referred me to National Orthopedic hospital Enugu. I was still in the hospital when the Emene police officers, whom I know and some of them know me quite well, they said they wanted to take me to Orthopedic but they took me straight to the commissioner of police.

At the state CID, the IPO, Henry, and another policeman went and met with the commissioner of police. When they came out, they said I should give them fuel money, that I am lucky. I told them that I didn’t do anything because I don’t belong to bad companies. I told them that what brought me to Enugu was to find how I can help my blind mother and so I cannot engage in idleness.

“They brought me back to Orthopedic and we exchanged telephone numbers. I gave them fuel money because we were friends but the following day, the IPO came back to chain me on this bed, saying that he has order, that they were still investigating the matter. The IPO later came back to tell me that I should look for a lawyer.

What did I do that I should look for a lawyer? The doctors and medical staff here have been annoyed over the matter. I have been on this chain since August 26. I am suffering for what I don’t know anything about.”

Like Loading...
READ  So Sad! Bandits Kill Father Before Abducting His Son In Katsina (Photo)
Page 1 of 1 Prev Next