A Twitter user identified as Time Keeper with the handle @Deothe_weirdo has stated that Davido‘s songs do not stand the test of time.

His tweet has sparked reactions from fans of the globally-acclaimed Afro-pop artist. Another user retweeted with the reply:

“This is so true. Considering his last album. No replay value at all. Hence it disappeared and evaporate to the atmosphere even faster than AIR”

The above comment may be sarcasm. It has, however, been responded to by fans of the DMW musician. 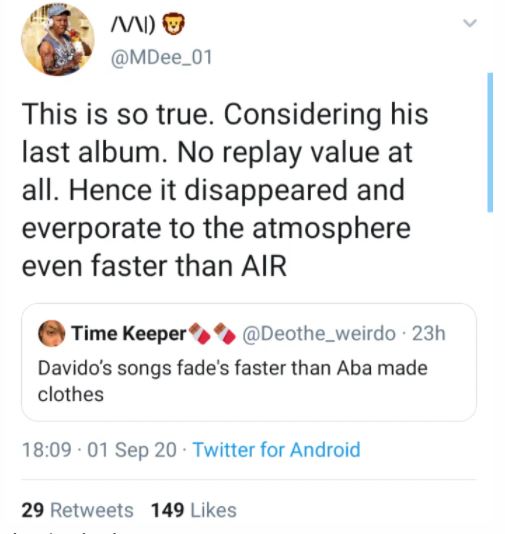 Fans are on social media, giving their various opinion on the project which features artistes like Naira Marley, Peruzzi, Zlatan, Poopcan, Summer Walker, Dremo, Chris Brown, A Boogie with Da Hoodie amongst others.

Wait how did Davido record that Get to you track ,that song is easily one of the best songs you will hear in years am shocked. #AGoodTime

This Davido’s new album is unusual and unexpected, more intimate than superficial. Mandem sound like a prime R.Kelly on “Get to You”. Too many jams #AGoodTime