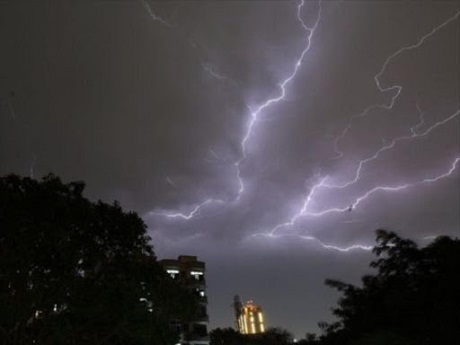 Lightning
A total of ten children have been killed by lightning in the north-western Uganda city of Arua.
The sad incident happened aafter the children had taken shade in a hut during a storm.
The children were said to be playing football when a heavy rain left them no choice but to take a break in a nearby grass-thatched structure which was struck by lightning.
Nine children, aged 13 to 15 unfortunately were killed on the spot. However, the tenth child died while being taken to the hospital.
According to reports, three survivors are receiving treatment at the regional hospital.
Uganda’s north-western region has been experiencing severe rains coupled with thunder and lightning.
This is the worst accident of its kind in Uganda since 2011, when 18 children were killed at a school in the mid-western region.
That year, 28 people also died from lightning strikes in a single week.
Deadly lightning is commonly reported in the East African country during the wet seasons.
In some cases, children have been struck while in their classrooms. Many classroom blocks, especially in rural areas, are not equipped with lightning diverters.
Prev postNext post
Use your ← → (arrow) keys to browse
READ  #RIPJeffBezos: Did World's Richest Man Drown In A River?
Page 1 of 1 Prev Next