The dance track which Wizkid dedicated to the ladies’ waists was released alongside a music video.

Since the song dropped, Nigerians have been reacting on Twitter with different views. Some Twitter users bashed the song on the basis of songwriting and terrible content.

Here are some of the tweets below; 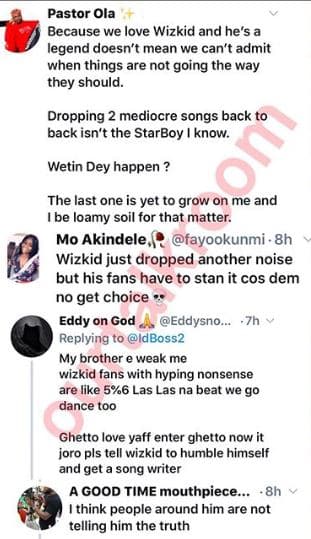 WIZKID is singing like an upcoming artiste 😂😂😂 #joro pic.twitter.com/BFCeV71mfN

– After listening to Wizkid's Joro pic.twitter.com/7WNJ0YqpqJ

Damn! I couldn't even finish watching the Wizkid joro video 🤦🏽‍♂️… Both the song and the video are just off… WTH! with those lyrics…So this is the Joro y'all have been anticipating for?…. pic.twitter.com/p09qk7j8W5

2seconds wizkid Ghetto Love flopped, now he has released joro later his fans will start carrying Photoshoped INVOICE of how the song went Gold in Canada and bronze in Australia… pic.twitter.com/1ciXtAGsPg

Wizkid – Joro
Somebody get this man a songwriter!
Your fave is struggling.

This wizkid joro song is pure and complete Trash. That nigga needs a fucking songwriter right now. Second dead song in less than two weeks. His lackadaisical nonsensical lyrics has run its course. He needs to emulate burna boy and write actual complex lyrics. Tired of this shit

I just listened to Wizkid's Joro, and I'll just leave this herehttps://t.co/D6rnZyL0HP

Wizkid need to work with songwriters. It wouldn't make him less of a musician. Afrobeat has spread across the globe. People want content and the earlier he realises that his fanbase isn't limited to Surulere, the better for him.
Joro is 2/10 lyrically
Production wise – 8/10

The joro song is not so bad.
Would have been much better with sound lyrics. Sounded like he was chewing mouth. It’s becoming a trend for wizkid

He can sing the songs, his name can help with publicity. I think he just needs a good songwriter

What is your opinion pertaining this song Joro by Wizkid?? Drop Your comment below…….