It’s already known that Wizkid has several children. Under the most recent estimation, there are three of them. It’s interesting that all three kids are born by different women. This is not a surprise because famous men with the same level of success and personal charm always have crowds of female fans. All the biggest Nigerian music stars of all times have a number of loved women or legal wives.

Wizkid appears to be no exception to this rule and the three children of his were born by three different women. It’s not a secret and we can see all of them on social media together with their lovely moms. Let’s take a look at each of the three little boys who look exactly like their father.

Sola(the first baby mama to the pop star) was the first woman ever who gave birth to Wizkid’s son back in 2011. She was 19 when she had her son Boluwatife. Things were not that smooth at the very beginning. At first, Wizkid even refused to accept the boy as his own and Sola needed to get a DNA test to prove that the boy is Wizkid son. The fight between Wizkid’s and Sola’s families lasted for two years before the famous Starboy finally accepted the child. It’s very touching to see the man posting his love for the son on Twitter and taking him to concerts.

The award-winning Starboy Entertainment CEO took to his Instagram story to share the picture of his first son looking dapper with the caption:

Boluwatife is the son of the singer’s first baby mama, Sola Ogudu. Boluwatife turned 9 on May 13, 2020.

Some fans were worried that Wizkid hardly posts his other sons apart from Zion on his social media pages. However, this post from the singer has cleared all doubts that he may have a favorite child. 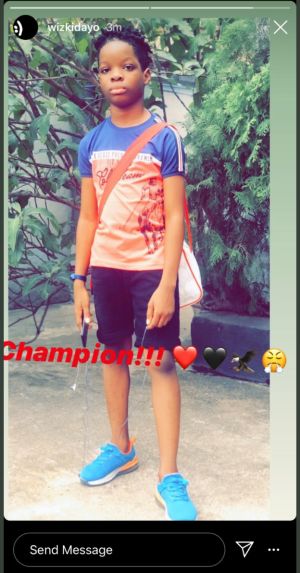