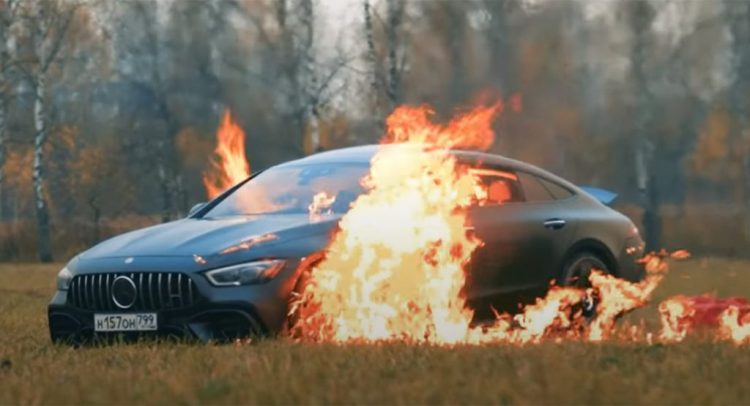 Mikhail Litvin, a Russian vlogger has made headlights after he torched the car. The vlogger set his car on fire after he got frustrated with having to deal with his Mercedes-AMG G63 constantly breaking down.

TheGuardian reports that the social media star made headlines following the action as the luxury car cost $170,000 and he has reportedly driven it only 15,000 km (about 9,300 miles).

Litvin who said he was sick and tired of the car breaking down claims the car has been in and out of repair shops over the last 10 months.

Fed up by the constant need for repairs and the manufacturer’s reluctance to accept responsibility, the Russian vlogger decided that the best way to solve things was to simply burn the car down to a crisp.

Reports have it that since buying the car, Litvin has visited the Mercedes service shop four times and every time the Mercedes dealership reluctantly accepted to cover repair costs, only to return the car to him without actually fixing the problems.

The vlogger claimed that, at one point, the dealership refused to fix the car, so he took it to a friend’s shop, where he discovered that Mercedes had used aftermarket parts instead of OEM ones on a previous repair.

In a bid not to spend money on expensive repairs any longer, he got rid of the car in a burning statement.

READ  My Body Is Meant For Billionaires Only – Bobrisky

He drove the car to the middle of a field, splattered it with gasoline both inside and out to the sound of dramatic Russian music, before lighting it ablaze and attempting to drive off in an old ZAZ 968m that eventually needed pushing.

This is not the first time someone is making a statement by destroying a luxury car.

In 2013, a Chinese man identified only as Wang was so frustrated with his Maseratti that he paid three men to smash it with a sledgehammer.

The Maserati Quattroporte was worth $423,000 and he had it smashed at the 2013 Qingdao Auto Show because he was disappointed with the way the car dealer had fixed it.

He waited for the Qingdao Auto Show and tipped off the media to show up for an unforgettable spectacle.

On the day of the show, he brought in his luxury car draped in a banner accusing Maserati of poor service and paid three men to smash it with sledgehammers, in front of hundreds of onlookers.

They shattered the car’s windscreen, headlights, grill and mirrors, and left some serious dents in its metal body.

“I hope foreign luxury car producers acknowledge clearly that Chinese consumers are entitled to get the service that is commensurate with the brand,” Wang said.