rolled out by the organizers yesterday.

The category in which he himself is on has five other promising acts such as Rema, Joeboy, Fireboy, Lyta and Victor AD. However, it seems Zlatan isn’t impressed by the organizers decision to include him on that list as he feels he is far superior to every other act on that list. The “Bolanle” singer took to his Instagram page very late last night to make known his opinion about the list.

He wrote; “We fit they the same school! Mago our department no be the same O ! #KELEGBEKOMOEGBE O Ayiiiii.” 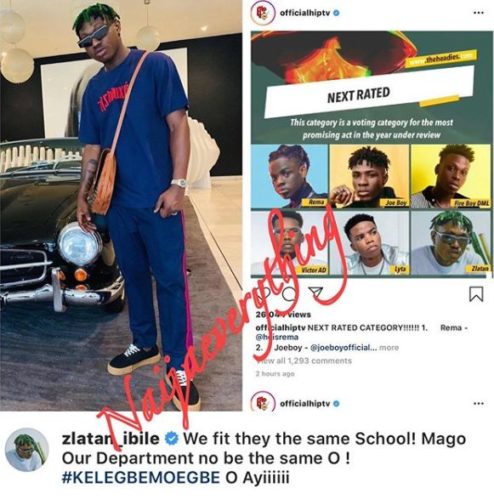 This opinion of Zlatan is being aided by a lot of music followers already. But as expected, there are other people who have felt his opinion is totally uncalled for as he fits perfectly into that category judging by the factors that are considerable by the organizers.

Whats your opinion on this??

Like Loading...
READ  “I Died When Biggie Called My Name” – Ozo Reveals How He Felt Moment He Was Issued A Strike
Page 1 of 1 Prev Next